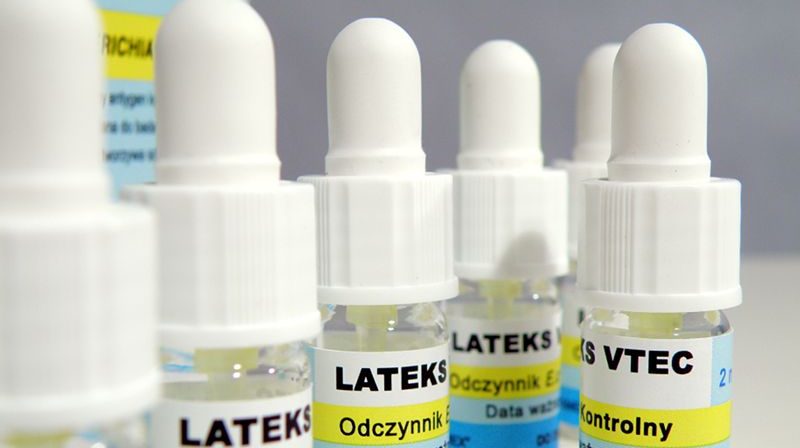 Biomex Co. Ltd. developed a new latex test "Latex VTEC", which allows the direct detection of VTEC strains in stool, based on determination of their belonging to a specific serological groups. It satisfies customer expectations, as well as allows adjusting the range diagnostic tests to the level of many other European countries. However, the final result of the test will be possible only after identifying pathogenic properties of isolated strains. The "Latex VTEC"kit was established on the basis of epidemiological data.

Method of performing the test is very similar to that for other latex test made by Biomex Limited Inc. and provides a preliminary result already after 48 hours of delivery of samples to the laboratory.

It is very important for prognosis, in connection with the possibility of implementation the appropriate antibacterial therapy, limiting the chance of HUS. Implementation of the test does not require special equipment or a laboratory. The use of killed cultures of strains makes safe for staff.

Infection with Verotoxic Escherichia coli (VTEC), also known as Shigatoxic Escherichia coli (STEC), or because the clinical course of infection, Enterohaemorrhagic (EHEC) results from consumption of contaminated food, water or less often a direct contact with infected animals or people. In the youngest children, the infection occurs most often due to lack of hygiene during food preparation

The cause of the disease of VTEC strains is their ability to produce one or two verotoxin (VT 1 or VT 2). For most strains isolated from the human material, an important role play additional pathogenic factors, such as intimin, proteins facilitating bacteria to enterocytes. The consequence of this is the appearance of histopathological changes in colorectal epithelial cells (described in English as "Attaching and effacing"-AE) and hemolysin, lizing human and bovine erythrocytes called enterohemolisin.

As we could see during an outbreak in Germany on an international scale in 2011 caused by a rare strain of E. coli among VTEC O104: H4 E. coli verotoxic sticks beyond the ability to produce verotoxins may have a pathogenic factors typical of other causing diarrhea E. coli. The study of DNA structure of E. coli strain O104: H4, which caused an outbreak in Germany showed that the strain had the characteristics of strain enteroaggregative E. coli (EAEC), which acquired additional virulence characteristics typical of VTEC.

VTEC infection is usually no fever or low temperature, in the form of varying intensity of diarrhea to hemorrhagic colitis (90%). Less frequently may occur others clinical manifestations (e.g. hemorrhagic cystitis). Diarrhea is accompanied by a strong stomach cramps and blood occurs at day 2-3 of illness in the stool. In some of patients can occur sick and vomiting. The highest incidence is observed in children from 0 to 4 years, lower in group 5 - 14 years and significantly lower in adults. In 10% - 15% of patients (mostly children under 4 years of age) from 1 to 14 days after the diarrhea may appear hemolytic-uremic syndrome (syndrome uremic haemolytica – HUS) with characteristic triad of symptoms: hemolytic anemia, thrombocytopenia and acute renal failure. Deaths is observed in 2% - 5% of patients, and as mentioned, are more common in patients infected with strains belong to rare serotypes, producing VT2. Probability of complications increases as a result of the treatment of some antibiotics. Another well-known complication of VTEC infection is thrombotic thrombocytopenic purpura (thrombotic purpura thrombocytopenic - TTP) which runs in the form of a generalized inflammation blood vessels which is accompanied by neurological disorders. Epidemiological studies, conducted in more than half the European countries, where infections cause Vero toxic VTEC E. coli bacillus, a much less stick belonging to one of more than 100 other groups antigens among which are detected VTEC strains. These data suggest a high participation of E. coli O157 among the VTEC, and indicate that in countries where the a routine diagnostics in toward VTEC is based only on the search for the majority of E. coli O157 infections may remain undiagnosed in the reality. However, in many countries, including Poland, laboratory diagnostics toward the VTEC is based on the fact that the majority of verotoxic E. coli O157 does not ferment sorbitol within 24 h and does not produce β-glucuronidase. In the first is used sorbitol supplemented media (MacConkey, SMAC or MacConkey, cefixime and potassium telluride, SMAC-CT) as a differentiating factor, in the second most of chromogenic culture media used for direct inoculation of feces in the direction of E. coli O157. Colonies with characteristic properties of the VTEC isolated from such culture media, always require confirmation of pathogenic properties characteristic for VTEC. In view of the significant participation of non-O157 E. coli among verotoxic strains, and the appearance of sorbitolo-positive verotoxic E. Coli O157 ( VTEC O157 SF), suitability the SMAC, SMAC-CT and chromogenic media for isolation of VTEC O157 is questionable. Especially, when it became apparent, that based only on the biochemical properties of E. coli O157 VTEC does not allow detecting not only the VTEC strains belong to non-O157 but also sorbitol fermenting VTEC O157. The most advanced technologies in diagnostics for the detection of VTEC strains, directly in stool seeding, genetic methods (hybridization of genetic probes, PCR,microarray), immunomagnetic separation tests or immunochromatographic are used as the routine testing are very expensive, require specialized laboratory equipment and are therefore widely available only in the a few countries.

1. The Community Summary Report on Trends and Sources of Zoonoses, Zoonotic agents and Food-borne Outbreaks in the European Union in 2008, EFSA Journal 2010 8 (1):1496